This little sunflower was made with Art Clay copper it was a but messy to roll out, cut and sand but torch fired well in 5 mins. It kiln fires in 30mins without carbon. Firescale dropped of easily when quenshed in water but cleaning with acid and polishing was required. Nice bright and shiney finish I like it quick easy and cheap to make! I prefered to torch fire it rather than kiln fire as getting it out of the kiln red hot to avoid as much fire scale as possible was a bit tricky. 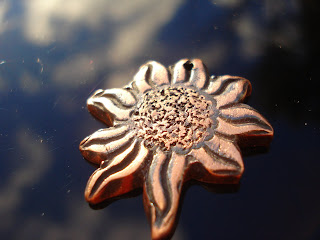 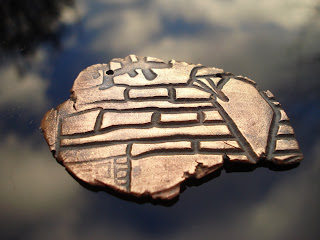 This piece was made with Hadar's bronze clay It was easy to mix and work with and fired succesfully but it did require a complex firing schedual as pieces larger than 1in have a 2 phase firing. It took 12 hours in total to make as it need to be cooled to room tremperature as the first fiing of 30mins than the second firing was 2 hours and left to cool. The carbon had to be changed for the second phase. It took quite a bit of cleaning in acid and then polishing to get a nice finish but the result was good. The sheen and the texure is lovely. Taking into account the time and firing costs not as cheap to make as I first thought it would be so I will use this on special pieces. I subsequently fired some Hadar's copper clay in the same way but the results were not as shiney as I hope they would be.
I will be trying out the Hadar's white bronze very shortly so will keep you informed on my results.

Promote Your Page Too