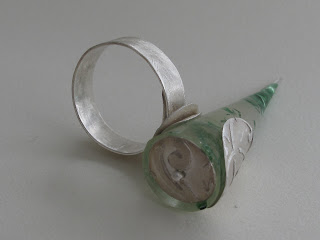 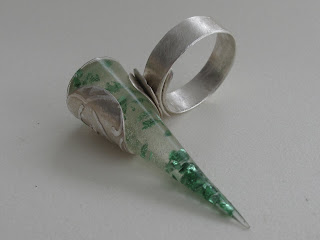 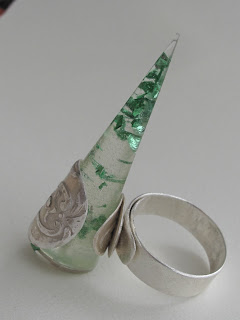 Hi everyone,
Well, here is the latest ring...and it has metal clay! WooHoo! Not big bling like those made in Barbara's class, but eye-catching no the less! (At least, I think so!) I am still having fun with the epoxy and trying to make rings that really stretch my imagination (and, hopefully, yours!). So, I thought of a way to make these epoxy cones, some of the batches worked, some didn't...needless to say, I now have a bunch of cones to work with!
I was planning on using the cones as a different way to use large CZs but the cones were too big for the CZs that I had. Since I am working within the deadlines of the RAW group, I had some time to play and still get my ring done. Originally, I was going to have the cone stand on point and set the CZ into the fat end and have a rivet going through the pointed end, but that didn't work out. My son, Morgan, actually thought outside of the box for me and laid the cone down flat on my finger and said I should make a girlie ray gun to make slow drivers get out of my way! He was just joking but it got my brain going!
I scrounged around the studio for some metal clay discs that I had made a couple of years ago and hadn't used and decided to use them like armor around the cone. I didn't have any metal clay bands so I used some sheet metal, filed and shaped, to make it. All of the parts are held together with just one big rivet!! I filed the rivet wire down a bit so it would be a tight fit and worked the long rivet into the band and up through all the discs and the cone. That was a bit tricky but I think it was worth it. I took a small head pin and doubled up the stem so it would hold the end disc in place. I drilled a small hole and placed a bit of glue (yes, I used glue!) in the hole and then set the head pin with the metal disc in place.
Well, I hope you like it. I am still playing with using other materials with the metal clay as the accents, if you are doing this too, I would love to see! Have fun in your studios, Kelly
Posted by Kelly Russell at 4:52 PM

Promote Your Page Too